When Ron Howard took over the Solo: A Star Wars Story project after the dismissal by Kathleen Kennedy of directing duo Phil Lord and Chris Miller (21 Jump Street, The Lego Movie)  questions were being asked about what the movie would be.  The movie is out now and it is best described as a case of the good, the bad and the ugly.

Solo: A Star Wars Story left me feeling a sense of confusion and where this is heading. I grew up with the Star Wars Original Trilogy (OT) Han Solo, a man who could one trust only one other being – Chewbacca (yes I am middle age white man who Lucasfilm now rejects). His motives were that of mercenary. Money was all he loved and that’s all he received until he took a chance and decided to open his heart to Leia.

Move forward from to the modern-day origins story being told today and we have a very different young Han Solo played by Alden Ehrenreich, yearning for acceptance and motivated by love but without all the idiosyncrasies, charm and wit found in Harrison Fords 1977 portrayal of the character. There was very little Han Solo in Solo: A Star Wars Story and what we did get was incomplete. Even worse is that Lucasfilm left the movie open for a sequel, that will now likely never be made leaving many loose story threads.

Much like 2011’s Green Lantern end scene where we see Sinestro donning the yellow ring (**SPOILERS!**), only for the film to be so bad a sequel was never made, Solo: A Star Wars Story follows a similar path with an incomplete and unfulfilling development of Han Solo that never truly intersects with the character we encounter in Star Wars: A New Hope. It will also seemingly leave Darth Maul as this films Sinestro – a loose story thread left dangling in the wind due to the films poor box office performance.

These loose threads make the film incredibly frustrating. Star Wars anthology films were always intended to be single movies – Lucasfilm got greedy, and now they have paid the price with an unfinished story. This film needed to transition Han from the young streetwise kid motivated by love, into to a loveless, wisecracking mercenary motivated by money – it failed.

On a positive note, the backstory and performance of Chewbacca were fantastic and kept the momentum of the film moving forward at times when it began to get bogged down in its own self-importance. The ability to use the Han-Chewie dynamic to crack a joke helped the film flow, but in reality, the wisecracking Han Solo was just never allowed to get to be the Han Solo we know and love.

Lando Calrissian played by Donald Glover was spot on, showing all the swag and charisma you’d expect of a young Lando (and a young Billy Dee Williams) and it is unfortunate that he isn’t involved more in the film. Lando’s affection for his droid L3-37 will be discussed below as it now plays an important role in the original trilogy of Star Wars films.

Another positive was the performance of Tobias Beckett played by Woody Harrelson. His character was the most memorable and enjoyable of the film. Beckett’s role as mentor to Han brought out the best in Ehrenreich and kept the narrative interesting due to his questionable motivations and allegiances. Solo: A Star Wars Story needed to transition Han into a Beckett-esqe character at its conclusion – unfortunately, we never got to fully see it.

Alden Ehrenreich as Han Solo left me feeling like I just watched a Star Wars film about another character – maybe it was Stan Solo, his second cousin, but it definitely wasn’t Han Solo.  The swagger in the character’s dialogue and mannerisms, in comparison to the ‘Harrison Ford’ Solo, were just that bit off and couldn’t afford to be.

It didn’t help that Ehrenreich had Emilia Clarke (playing Hans love interest Qi’ra) to work with. While being great as the ‘Mother of Dragons’ Daenerys Targaryen in Game of Thrones, Clarke’s performance was reminiscent of Natalie Portman in the prequels – made of a nice teak or mahogany and dialed in from afar. It was really disappointing but not unsurprising after a similar lackluster performance as Sarah Connor in Terminator Genisys (2015). Perhaps sci-fi movie roles just don’t suit her skill set.

Another character that didn’t quite hit the mark was Paul Bettany’s Dryden Vos, the head of the crime syndicate Crimson Dawn run by Darth Mual. The character came across as ultra creepy rather than menacing. It was a Harvey Weinstein disgusting-filthy kind of creepy, which didn’t really sit well with me within the story – I think they tried to be more subtle with it but failed. The creepiness was too obvious, or maybe I just had a heightened sense of these character traits as they were expressed by a human actor in this film, rather than from the gigantic slug Jabba in Return of the Jedi.

I would like briefly discuss the character of Rio.  Part of Beckett’s crew, Rio is wisecracking and fun. I loved his short-lived role in the film and it was surprising that a character so entertaining (and so Disney) was not used more in the film. I feel like some hilarious Rio/Chewie scenes may have been left on the editing room floor. This character alone confirms that Disney and Lucasfilm can still do Star Wars right, but for the moment they appear interested in doing three things – injecting Social Justice politics, setting up a NEW Star Wars universe, and doing a set of Star Wars stories that can only lead to one thing – remaking the original trilogy in a slightly different tone.

It is here where we must discuss the droid L3-37 in Solo: A Star Wars Story. Scenes with L3-37 are reminiscent of the cringe-worthy C3-PO jokes littered throughout the prequels. It is the most obnoxious droid to ever grace the Star Wars universe and almost seems like a parody of the SJW movement upon the first appraisal. That is until you realise from interviews with Phoebe Waller-Bridge, the actress who plays L3-37, that we are supposed to like and relate to this character as seen in an interview with starwars.com.

L3-37 only becomes meaningful in its death and the following integration with the Millennium Falcon which enables the crew to successfully navigate the Kessel Run. This ties in nicely with The Empire Strikes Back where Lando’s affection for the Falcon is the same as that portrayed for L3-37 and the craft is lovingly referred to as ‘she’. This is the type ‘she’ you would use to affectionately describe your old 1964 Mustang convertible (most people can relate to an emotional attachment to objects such as cars or boat in such a way) – not the pansexual way that oddball Solo: A Star Wars Story co-writer Jonathan Kasdan would have you believe.

The Kessel Run scene is the peak of Solo: A Star Wars Story. This 15 minutes is action-packed Star Wars fun where it and it begins to feel like Ron Howard is going to pull this all together with beautiful special effects, a brilliant chase and edge of your seat excitement (besides already knowing the outcome). The Kessel Run got the treatment it deserved and fans of the original trilogy cannot be disappointed. This part of the film again shows that Disney can get it right with Star Wars when they want to. 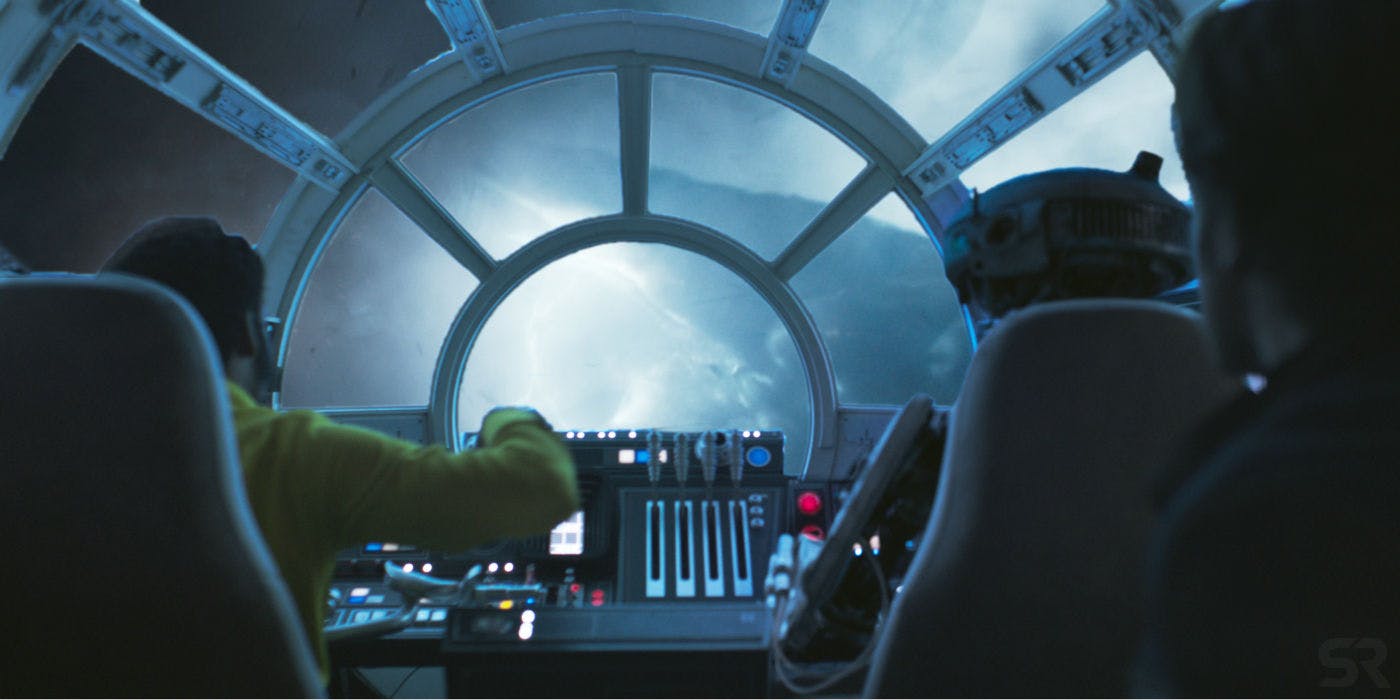 I am going to finish this review of Solo: A Star Wars Story by giving it a score of 6 out of 10 as well as an analysis of the character Enfys Nest, and what I believe this movie means for the direction of Disney’s Star Wars franchise.

In Solo: A Star Wars Story the Enfys Nest crew feels like a band of ‘rebels’, and use the word rebels purposefully to link it to the animated series Star Wars Rebels, where a seemingly ragtag bunch fight for freedom in a period before the Rebellion exists. When Enfys Nest takes off the mask to reveal a teenage girl it felt like similar to the introduction of Ezra Bridger and Sabine Wren on Rebels.

The teenage Enfys Nest and the force wielding broomstick kid from the The Last Jedi hints at a strategy of NEW Star Wars stories targeted specifically for kids. Let’s just hope they can also do it in an intelligent way. A part of this strategy may also be to remake the original trilogy to extend the brands value out for decades to come – it does make sense.

Star Wars is (as it should be) for kids – there is no arguing this point. Adults get enjoyment out these incredibly entertaining kids movies because they are nostalgic about their own childhood and because the films are intelligent enough that they do not talk down to kids. They are simple stories using the well-known social values of ‘right and wrong’ that anyone above the age of 6 understands and relates to. Everyone aged 6 to 96 knows the difference between a hero and a villain.

The future of Star Wars will be a remake of the original trilogy of films as these new anthology films introduce us to a new set of actors portraying the fans much-loved OT characters. We now have Han, Chewy and Lando cast – you could also imagine the NEW Millennium Falcon being voiced by L3-37.

The Obi-Wan film will cast Ewan McGregor as Obi-Wan and he will age well into the role of Luke’s grey-haired mentor for the remakes. The film will also be able to introduce an updated C-3PO and R2-D2 in some way.

Luke and Leia are yet to be cast in the anthology series but you could imagine that they could be introduced as part of the Obi-Wan film as well considering that Leia knew how to contact Obi-Wan in the original Star Wars film and so must have had interactions with him prior to sending her distress call from the Tantive IV via R2; and Luke is being watched over by Obi-Wan on Tatooine at the conclusion of Revenge of the Sith and in the Star Wars Rebels timeline.

Further characters could be introduced via the proposed Boba Fett anthology film including a host of other bounty hunters, Jabba and perhaps even a Darth Vader without James Earl-Jones voicing the character for the first time. Ian McDiarmid, similar to Ewan McGregor as Obi-wan, is the logical casting choice for Emperor Palpatine but age could be an issue. Perhaps an Emperor/Vader anthology film should be on the whiteboard at Lucasfilm.

I don’t know when the fan base will be ready for the remakes but one could imagine that 10 years from now Star Wars: A NEW New Hope will be hitting cinemas.