The failure of Solo: A Star Wars Story in cinemas around the globe and the ensuing lack of interest in merchandise attached with the film may yet offer a boon for collectors with a long-term view. Not since 1985 has there been such a lack of interest in the Star Wars toy line. Walk into almost any department store and the Star Wars toy section is either non-existent or looks like a post-cold war supermarket in East Germany – shabby and disorganised. But if history is an indicator not all is lost.

In 1985 the Star Wars popularity train had well and truly left the station. There were no more films to build hype around the brand, and a lot of the younger kids had gotten older and out of the market, leaving Kenner’s 1985 Power of the Force (POTF) toy line warming the pegs in toy stores. 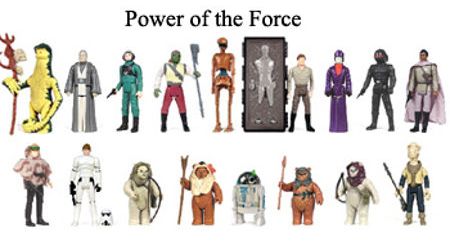 Amongst this maligned, and at the time little known POTF toy line, were the “last 17” figures ever made for the original trilogy of Star Wars films. Their importance to collectors and monetary value would not be discovered until a decade later when the kids of the 1980’s grew into the nostalgic adults of 1990’s and 2000’s.

The nostalgic Star Wars addicts looked to complete their childhood collections with the figures they never had as a child and quickly discovered there were 17 figures they could hardly remember. Some of these “Last 17” figures were a challenge to find and presented as a large financial investment for these collectors. Yak Face is one such figure.

Yak Face was a background character in Jabba’s Palace in Return of the Jedi. The figure was never released in the US market – only sold in Europe, Canada, and Australia. It is this scarcity that has driven its value up to $400-$500 for loose figures and for $1000 to $3000 for various carded examples.

The POTF line contains some the of the best (General Lando Calrissian) and worst (Imperial Dignitary) figures in the entire Kenner line. Those who had these figures in their collection, or had somehow kept and stored carded figures from toy store bargain bins, were sitting on a goldmine.

Fast forward to May 2018 and the release of the Solo: A Star Wars Story action figures. While not exactly like the mid-80s (as there are still many Star Wars films in the pipeline) the hype around Star Wars has died off, and there is more competition from other brands for kids attention. Two of these – Marvel and DC Comics – seem to transition kids, to youths, to adults more readily than Star Wars.

Hence Hasbro’s Star Wars: Solo toy line has faded into obscurity much like the POTF line in the 80’s – either warming the pegs in toy stores, or not being stocked by toy stores still filled with figures from the previous The Force Awakens, Rogue One and The Last Jedi figure lines. The Star Wars: Solo line has been lost to everyday collectors which is why it may be time to invest in the line – it’s relatively scarce for a modern toy line in the US – especially in overseas markets now that US Amazon is blocked in markets such as Australia.

The Star Wars: Solo line has an advantage in its ties the original trilogy of Star Wars films made popular by characters such as Han Solo and Chewbacca. These ties make it a toy line many fans will look for once the current Star Wars “funk” and culture wars are finished.

Now … I am about to advise something which goes against all my thoughts and reasoning behind collecting modern Star Wars – and I have collected the Star Wars Rebels and Rogue One toy lines and display these loose as I love these two Star Wars tales. In my thinking collecting modern as an investment is a pointless exercise due to the numbers of toys produced and the numbers of people buying them and never opening them to “hold” their value to collectors. Add to this the lack of nostalgia for the characters and it seems futile unless you just get them for the love of toys you are buying for your collection.

Invest in this small toy line as one day it might be known as the “Forgotten 26”.

It may take some time and you will need to invest in the vehicles to get some of the exclusive figures but it is worth a chance (I can’t believe I am saying this – maybe the black series will be worthwhile too – I will never say that again).